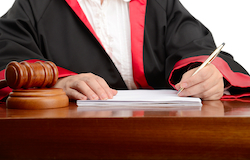 New Jersey has changed its procedures for bail and pre-trial release. These changes, which represent a complete departure from prior law, went into effect on January 1, 2017.

Under the prior system, a defendant’s pretrial release depended upon their ability to post a monetary bail. Under the new procedure, pretrial release depends upon the extent of the risk that the defendant will not appear in court when s/he is supposed to do so, and whether the defendant is a danger to the community. The new bail and pretrial release procedures are designed to address a problem known to exist for a long time. Under the old procedure, defendants who did not present any meaningful risk to the community could remain in jail throughout their case only because they could not afford to pay even a small bail, whereas defendants with more significant resources could afford to post bail even if they were a flight risk, or were perceived as dangerous.

Under the procedures that went into effect on January 1, 2017, when a defendant is arrested on a complaint-warrant, the judge setting bail will use an objective, validated risk assessment tool to assess the risk that the defendant will be arrested for a new offense; be arrested for a new violent crime; and/or fail to appear in court when required to do so. Based upon the risk assessment score, the defendant will be classified as low, moderate or high risk, and the judge will then set the terms and conditions of pretrial release accordingly. The decision to release or incarcerate the defendant must be made within 48 hours. The courts will, however, be trying to make this decision within 24 hours.

Further, the new procedures create a hierarchy for different forms of pretrial release. The majority of defendants are supposed to be released on their own recognizance (or “ROR’d”), if the court finds that it is reasonably likely that s/he appear when expected to do so; that there is minimal, if any, risk to the community at large; and that the defendant will not obstruct the criminal justice process. However, the judge making the release decision will have the discretion to set a monetary bail in what is anticipated to be limited circumstances. Further, on a motion by the State, and after finding that no amount of monetary bail, non-monetary conditions, or a combination of both, can assure the defendant’s appearance in court, protect the community, and prevent the defendant from interfering with the criminal justice process, the court can order the defendant to be detained until trial or other resolution of their case. Thus, the options available to the judge reviewing the bail issue are as follows:

The court can order detention only when it finds by clear and convincing evidence that no conditions of release can satisfy the three goals noted above. The State can file a detention motion at any time. The hearing can be held within three days, but the defense can request five. The defendant can remain temporarily detained until the hearing. If the court orders that the defendant must remain in detention, the “speedy trial” clock will start to run, and it is expected that the defendant will be tried within 180 days. Factors in the court’s decision on the detention motion include: the nature and circumstances of the charged offense; the weight of the evidence against the defendant; the defendant’s history and characteristics including, without limitation, whether the defendant was on some sort of supervision (e.g., probation) at the time of the offense; whether the defendant presents a danger to the community; and the risk assessment score. Only an experienced criminal defense lawyer in New Jersey will understand all of these procedures.

We are New Jersey criminal defense attorneys representing defendants in every county in New Jersey, in the New York State criminal courts located in Manhattan and Brooklyn, and in the federal courts in New Jersey and New York City. If you have been arrested and charged with a crime, the only thing you should say to the police is “I want a criminal lawyer now.” Then, contact us immediately to discuss your case.