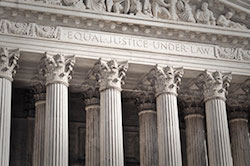 A federal criminal case pits the defendant against the full force of the prosecutorial authority of the United States Government, which includes the United States Attorney's Office and any number of federal law enforcement agencies. Few things can be more overwhelming than having to confront law enforcement authorities on the Federal level. Because the opposition is so fierce and the stakes are so high, representation by an experienced New Jersey federal criminal defense lawyer is critical. In fact, the defendant's freedom depends on it in almost every Federal case.

Many of our federal cases involve federal drug charges. Federal authorities are enforcing narcotics laws more aggressively than ever. The penalties in these cases can include substantial prison sentences depending upon, among other things, the type and quantity of substance involved.

Further, the number of federal prosecutions relating to computers, the Internet and/or the World Wide Web is also growing. This marked increase in criminal prosecutions for Internet crimes is attributable, at least in part, to technological advances and growing cooperation between law enforcement agencies at all levels of government. Law enforcement is steadily becoming more sophisticated in the detection, investigation and prosecution of this class of offenses. Criminal defendants facing such charges need to be represented by an experienced federal criminal defense attorney in New Jersey who understands these cases.

If you have been charged with a federal offense in New Jersey, call 800-361-6554 to discuss your case with a seasoned New Jersey federal crimes lawyer. If you are being investigated for a federal offense, do not speak to law enforcement authorities. Instead, insist on speaking to a New Jersey federal criminal attorney, and contact us online or call toll free at 800-361-6554. We can - and will - provide you with the aggressive representation you need to achieve the best possible outcome in your case.