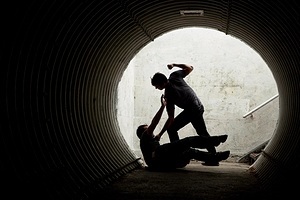 Violent crimes present unique challenges for defendants and their New Jersey criminal defense lawyers. The evidence can be voluminous, as well as highly technical. The case can take a considerable amount of time to resolve. The victims and their families are frequently active in the case, and often expend considerable effort hounding the prosecutor's office for "justice". Finally, and depending upon such factors as the defendant's prior record and the severity of the offense, the sentences in these cases can sometimes be measured in decades, as opposed to years. Most of these cases involve first degree charges. These cases all have one thing in common - they are high stakes cases where everything is on the line. Defendants facing these charges should be represented by an experienced New Jersey criminal defense attorney.

The law firm of James S. Friedman, LLC represents defendants accused of violent offenses such as:

While a full discussion of each of these offenses is beyond the scope of this page, here are a few selected facts that defendants charged with violent crimes (and their families) should know:

Vehicular Homicide or "Death by Auto" - In every car accident resulting in a fatality, the prosecutor's office will commence an investigation to determine if criminal charges are warranted. A charge for this offense can, therefore, potentially arise from any car accident that results in a fatality.

Kidnapping - Kidnapping occurs when a victim is taken for ransom, held as a hostage, or taken in furtherance of other criminal activity. Terrorizing the victim or depriving a parent of custody of their child may support a kidnapping charge. Attorneys defending against kidnapping charges must determine whether the defendant took the victim while reasonably believing that his or her actions would ultimately protect the victim from harm, or whether the defendant reasonably believed that he or she had permission to take the victim.

Charges for these offenses can involve large amounts of scientific and technical evidence, such as DNA evidence. An experienced criminal defense attorney must know how to review and challenge such evidence so that it is either excluded, or found to be wholly lacking in credibility.

We are criminal defense lawyers in New Jersey who represent defendants charged with violent felonies. If you or someone you know has been charge with homicide, robbery, carjacking, kidnapping or a sex offense, contact us immediately.