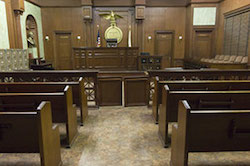 Ever-tightening gun laws have a harsh impact on anyone charged with a weapons offense. Carrying a weapon without a proper permit can result in a prison term. Using a weapon while committing a violent felony can (and almost always does) result in an enhanced jail sentence.

Minor weapons offenses, such as possession of a gun without a valid permit, were formerly simple and straightforward cases that were resolved quickly and easily. But Federal and State laws in this area have changed dramatically in recent years, and gun crimes now have greater consequences and require considerably more effort to dispose of. Many States, including New Jersey, have laws that frequently mandate a prison sentence in every case involving a gun. On the Federal level, strict sentencing guidelines in cases with weapons can similarly result in long prison terms.

Many gun cases raise issues concerning the legal definition of possession. If you are in the company of someone who is carrying an illegal handgun, you can be charged with possessing that gun regardless of the fact that it is not on your person. This is because the law recognizes two types of possession - actual and constructive. You may not actually possess the gun, but can still constructively possess it if you have access to it. Many defendants find themselves charged with weapons offenses arising from factual scenarios that fit this pattern.

We are New Jersey gun charge lawyers representing defendants with weapons offenses in the State and Federal courts in New Jersey or New York City, including:

Before saying anything to law enforcement authorities about a weapon in your possession or under your custody or control, contact us.

Many Items can Qualify as a Weapon in a Criminal Case

While most weapons charges involve a gun, anything that can be considered a dangerous weapon can lead to serious criminal charges. This includes knives, clubs, baseball bats, hammers, and other objects that are not typically considered weapons, but may be used to intimidate or injure someone.

Gun Crimes and Other Criminal Charges

Weapons charges appear frequently in robbery, drug possession, assault and similar cases. Possession of a weapon in such cases can ultimately enhance an already harsh penalty. Further, the charges can stack up fast and, depending upon the case, result in the imposition of consecutive sentences and even longer prison terms.

Defendants with weapons charges or gun crimes may be facing a significant prison sentence. If you have been arrested on weapons charges or any related crime, such as a drug offense that also involved the use of an illegal handgun, you should be represented by an experienced New Jersey gun crimes lawyer. Contact us for aggressive representation in any State or Federal gun case. Call 800-361-6554 (toll free) or contact us online to schedule a consultation.