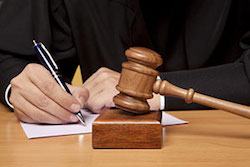 Inmates in New Jersey state prison retain certain rights regardless of their incarceration. One of those is the right to appeal an adverse disciplinary ruling resulting from an alleged violation of institutional rules. Prison life is tough and filled with many opportunities to get into trouble with fellow inmates and prison guards. As a result, many prison inmates incur charges during their term of incarceration. Inmates who are found guilty of such charges need a seasoned inmate disciplinary appeals lawyer in New Jersey to represent them before in the Appellate Division.

Typical prison or jail disciplinary matters that can lead to an appeal include:

A Biased and Hostile Forum

Disciplinary matters are initially dealt with in the prison setting, without meaningful legal representation for the inmate. Most people do not know that the New Jersey prisons have their own internal court system, frequently referred to as "Courtline". Courtline consists of two levels. At the first level, a hearing officer will hear testimony, usually from a corrections officer, describing the alleged violation. The inmate is not entitled to representation by a trained attorney at this stage, but can present evidence in their defense. Not surprisingly, the hearing officer almost always finds the inmate guilty. The punishment can consist of a series of harsh sanctions that can include a period of time in "administrative segregation" (solitary confinement), loss or curtailment of visiting privileges, and loss of valuable time credits.

At this juncture, the inmate can finally seek real justice by retaining a New Jersey inmate disciplinary appeals attorney to appeal the decision of the administrator to the Appellate Division of the New Jersey Superior Court. This can be the first opportunity for an unbiased review of the case, since this appeal will be heard by a panel of appellate court judges, as opposed to employees or representatives of the New Jersey Department of Corrections. A successful appeal could restore the inmate's privileges.

The New Jersey, law firm of James S. Friedman, LLC, represents inmates who seek to appeal an adverse disciplinary ruling to the Appellate Division of the New Jersey Superior Court. We have represented numerous inmates in disciplinary appeals, resulting in the restoration of time credits, visitation privileges, and other valuable rights.