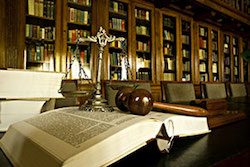 The New Jersey municipal courts are local courts that hear cases involving traffic infractions including, but not limited to, charges of speeding, careless driving, or driving while intoxicated/driving under the influence. Municipal courts also hear lower-level criminal cases involving the possession of relatively small quantities of illegal drug and simple assaults. Many New Jersey residents will have to appear in a municipal court at some point, and this will probably be their only encounter with the criminal justice system.

What to Expect in Municipal Court

Municipal court cases are frequently resolved in a single appearance with a negotiated guilty plea to a reduced charge, and payment of a fine and court costs. Sometimes, a case may not be resolved so easily, and a trial will be necessary. Municipal court trials are non-jury trials; the municipal court judge, working alone without a jury, will take the evidence (witness testimony and physical evidence), and then decide the case.

These trials are generally conducted quickly. Because the trial court record is relatively concise, identifying viable issues for further review can require considerable skill and experience.

The municipal appeals law firm of James S. Friedman, LLC, represents defendants in municipal appeals throughout the state of New Jersey. We bring all of our appellate experience to bear upon municipal appeals so that all viable issues are identified, properly briefed and presented to the Superior Court judge that will hear the matter.

Experience has shown that many municipal appeals arise from a second or third conviction for driving while intoxicated. That is not surprising, since an adjudication of guilt in such a case can result in an extended suspension of a New Jersey Driver's license, as well as county jail time. Anyone living in New Jersey knows how difficult daily activities can be without access to a car. Driving privileges are worth protecting. Defendants who lose that important right may be able to have it restored by means of an appeal.

If you have had an adverse result in a New Jersey municipal court matter and want another judge to take a fresh look at your case, contact municipal appeals lawyer James S. Friedman, online or call toll free at 800-361-6554 to learn more about municipal appeals.